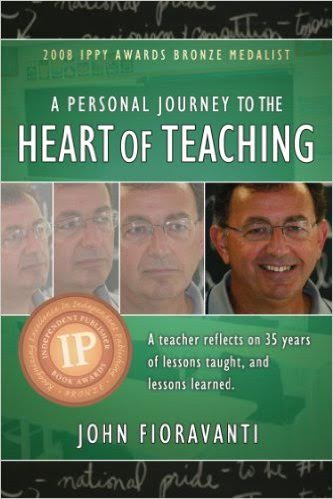 The excerpt below is taken from

“A PERSONAL JOURNEY TO THE HEART OF TEACHING”

We both survived Diana’s grade eleven year quite gracefully, but I was still struggling to fit in at my new school.  The year before, my first year at St. David, none of the students there knew me and I felt like a rookie all over again.  The lack of familiar ground let the old anxiety return to haunt me, though soon I’d begin to gain that confidence back, thanks to my essay teaching method.

I had always explained to my students that my structural formula for an essay was not the only method that could be used, but, I insisted they follow my directions until they had mastered the basics of organization.  From my own personal experience in university, and that of former students, I knew my formula worked well.  I remember during that first year, teaching one young lady (I’ll call her Joan), who liked History and was in both of my OAC (grade 13) History courses.  She was very bright, quite self-assured and assertive.  She was forever challenging my essay writing expectations, because she found them very restrictive.  I would smile at her and say she needed to prove to me she could master my method of essay writing, and later she could write any way she wanted at university.  She was not happy with me.

A year later she returned to pick up her younger brother who was writing a final exam in the cafeteria where I was presiding.  As the students were exiting the room, Joan walked over to me and gave me a big hug.  She told me that I had saved her life.  I was very surprised and embarrassed.

She laughed at the expression on my face and explained she was enrolled in a very demanding concurrent program at Queen’s University in Kingston, Ontario and that her essays had pulled her through the first semester.  After she left, I scratched my head, totally befuddled.  I was sure that this girl really didn’t like me at all the year before.

The surprise I experienced at the hands of Joan was surpassed when another former student came to visit…(I’ll call him James).  This young man had transferred from a private high school for his OAC year.  He was a tall, handsome young man who was very bright, and a hard worker, to boot.  As did Joan, James took issue with my essay methods.  In a respectful manner, he fought me tooth and nail every step of the way throughout the course.  He complied with my wishes but he made it clear that he was just humoring me.  James wrote some terrific papers and graduated with top marks.

One day, several years later, I was eating my lunch in the classroom when the secretary called over the PA system, asking me to meet a visitor in the main office.  When I entered the office, there was James with a great big smile and hand outstretched to shake mine.  We then went out to the hallway and he explained why he was visiting.

“I was thinking about you this morning,” he began.  “You see, I finished my degree and I was thinking about how much I owed you for my success at university, and it suddenly occurred to that you didn’t have any idea !  So, I came here today to thank you and to ask you something.”

I felt stunned, but I asked him to go on.

“Please sir,” he began, “don’t ever stop doing what you did for me!”

That said, he bade me goodbye and left the building.  As I made my way back to my classroom, I began to smile and I thought of Ruth.

That’s a promise I can keep, I thought, and that day, I found I had a bit of spring to my step.

To learn more about John:

MARCH BOOK OF THE MONTH!

“TURN THE LIGHT ON” by Author, Pat Garcia