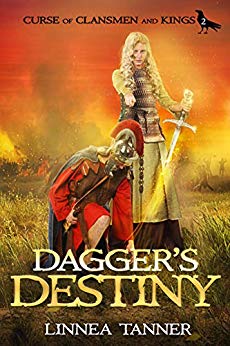 “Bring in the prisoner accused of treason,” the king’s guard announced, opening the massive door for Catrin to enter the Great Hall. As she entered the wood-beam vaulted chamber, she noticed the spiked skulls on the stone walls looking down at her with empty eye sockets. She had not given the skulls much attention before. They were nothing more than wall decorations that greeted visitors. Some of the jaws of the skulls gaped open with fear while others gritted their teeth in pain. The various skulls were once heads of formidable rivals from other tribes or treacherous nobles within her father’s circle.

Catrin wondered how her small skull would look among the others.

Her eyes shifted to the pathway opening for her in the midst of nobles, warriors, Druids, metalworkers, craftsmen, mothers, children and elderly—townspeople she had counted as friends, who now viewed her as a traitor. She could feel the weight of their judgmental eyes crushing on her chest as she slowly approached the royal thrones elevated on a dais. Her parents were waiting for her there.

The long skirt of her emerald-bodiced dress made it cumbersome for Catrin to put one foot in front of the other without tripping. She studied her parents’ faces. They were like iron masks of hard justice that made her pause before taking the next step forward.

At least, she tried to reassure herself, I’m not shackled as a common criminal.

The crowd was as quiet as a grave, unlike at most trials, where the people clamored for justice. The spectators gazed at her with grim faces similar to the skulls on the wall. She could sense their quiet rage of disapproval for her betrayal. She could not deny the charges she had slept with the enemy. How could they ever understand how strong her love was for Marcellus? Their bond had been forged by the gods.

Approaching the thrones, Catrin reflected on the conversation she had earlier with her father. She shuddered, not knowing if and how she had altered Rhan’s curse.

In the corner of her eyes, Catrin caught a glimpse of Agrona shuffling out of the crowd toward the thrones. The despicable Druidess ascended the three stairs and stood beside the king. Bitterness gnawed at her that Agrona, the embodiment of Rhan, still served as her father’s spiritual advisor at her trial.

Agrona should be on trial for treason. Not me!

From the back of the chamber, a child’s voice shrilled, “Cut off her head!”

A chill struck down Catrin’s back as other voices from the mob rumbled in the chamber like claps of thunder.

Catrin felt like an insect trampled under the wrath of her people. With growing angst over how the king would judge her, she felt paralyzed, barely able to move one foot in front of the other. Looking down, she realized that she was wearing the same dress she’d had on when she first met Marcellus earlier in the spring. She pulled the heavy fabric off the floor with her trembling hands.

Squaring her shoulders, she tightened her calves and clamped her heels on the wood plank floor so she would not waver but present a stoic mien. The shadows of torch flames cast up the gray walls like the quavering arms of hooded executioners. She inhaled deeply and steadily took her final step to the front of the dais to await her father’s next command.

King Amren, a broad-shouldered man of short stature, rose like a colossus from his throne. He stepped to the front of the platform and said nothing.

Amren’s baritone voice thundered, “Catrin, you stand accused of treason. Every person in my kingdom is held accountable for his or her actions—most of all, anyone in my family.” The fiery torches near the skulls on the wall reflected on the king’s eyes as he grimly announced, “Witnesses gathered here will attest that you willingly slept with the Roman enemy called Marcellus Antonius. This Roman gave you a marble figurine of Apollo, his patron god. This talisman struck you down with the falling sickness. My spiritual advisor claims this is a sign evil spirits possessed you. You assaulted the queen before you were taken away by Agrona to cast out these demonic forces. Princess Catrin, come up here and stand beside me to face your accusers.”

Catrin hadn’t adequately prepared herself to hear the gut-wrenching accusations. The mob appeared to wave back and forth as she climbed the first step to the thrones. Her legs felt weighed down as she cautiously ascended the second step, firmly planting the sole of her shoe before lifting herself onto the third step.

To learn more about Linnea: