A real shock awaited me.

The police were there making a check of the guest house.

While sitting on the verandah with an American guy, Stan, I remembered with horror that Scott had given me a small container of grass and that it was lying on my bedside table. I just hoped that my friend Graham had managed to get rid of it somehow.

My heart fell when I was called into the room and confronted with it. I didn’t have much choice about confessing that it belonged to me.

They carried out a body search, turned out my bag completely and were disappointed not to find anything else.

The next hour or so was spent filling out forms and reports for myself, Stan (small amounts of opium and grass) and Andy, another American guy, who was visiting a friend at the house. He only had a small amount of grass on him.

We all pleaded guilty. What big offences we thought and hoped that the situation could be sorted out within a couple of hours.

They had taken our passports and we had to go with them in an open truck to the police station where we were escorted inside. We sat in an office for a while and all of us at that time were expecting to be interviewed, fined and released. However, the wheels of Thai justice don’t move that fast.

Throughout this ordeal, a single thought went round and round inside my head: where oh where had it all gone so horribly wrong…

Was in two minds about moving on to Agra and by the end of the day was still uncertain whether I had made the right decision or not. I left the guest house at 8 a.m. still feeling rough from my stomach complaint.

Got a scooter-taxi out to Old Delhi railway station from where the train would leave. I bought a second class ticket. As things worked out it would have been cheaper to buy a first class air-conditioned ticket for R76 than the R13.50 I did pay.

Went to the platform and the train was already there. It was filling up fast so I jumped on. Found a place in the corridor by a window where I had to sit on my bag as there were no seats left. The compartment was absolutely jam-packed and there was no room to move. Even so they managed to pack in more people at a couple of stations along the way.

We stopped at one when things started to go wrong. I had been perched on my bag reading, getting covered in soot and dirt from the steam engine, when for the first time I had to move as the platform came along on my side.

It wasn’t easy, to say the least, as I battled against crowds of people and became pretty dazed fighting to get away from the door. Only about ten minutes later did I discover that my wallet was missing!

After a search round, with the help of virtually everyone in the carriage, I came to the conclusion that someone getting off at the previous station had picked my pocket. I was upset and annoyed at myself as this was the first time in all my travels I had been a victim of anything as basic. There was R290 in the wallet but at least I still have my passport and travellers cheques.

The people in the carriage were good to me. They first helped look for the money and when we realised it had been stolen they started a small collection, which at first I tried to stop. Everyone put in one or two rupees, quite a lot for many of these people. In the end they collected nearly R80 which was given to me.

I was really grateful and couldn’t thank them enough. They wouldn’t have any of it saying that they wanted me to leave their country with a good impression. I wonder if the same would happen in Europe.

The trail zig-zagged down the hillside and was very stony. It consisted of a lot of shale which made it slippery. Worse still the skies were darkening and I could hear distant thunder. The rain started coming down as I crossed a rickety bridge over a small river. I got out my waterproof jacket and strapped it around the rucksack to try and keep the contents dry.

I struggled on as the strength of the storm and the heaviness of the rain increased. The track now wound round the edge of another hillside and after a short while, really drenched, I arrived at a little village called Thokra.

This was a real godsend as there were a couple of small restaurants and hotels, obviously to cater for the stranded tourist like me. I dashed into the first place I saw and everyone was delighted to see and welcome me to their two room hotel of which I appear to be the only occupant.

To learn more about Robert:

SEPTEMBER BOOK OF THE MONTH!

“MY MAINE” by Author, Bette A. Stevens 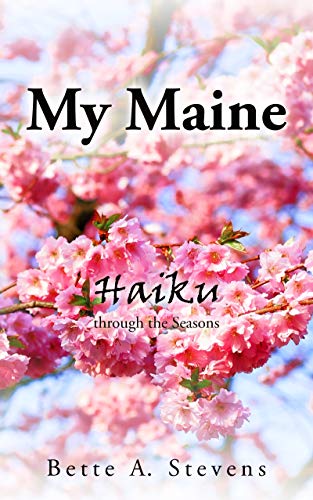