Is it reputable or is it dishonorable?  Well, so that you have a clear understanding of what a reputation is, let me give you a little refresher on the word. 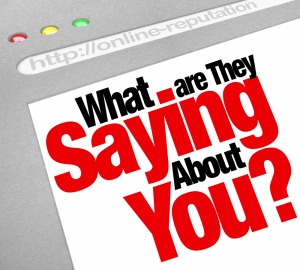 The estimation in which a person or thing is held, especially by the community or the general public;  the way in which people think of someone or something.

As an author, regardless of what others think or how I am perceived, my reputation is of extreme importance to me.  I have worked hard to build my name and standing in the literary community, therefore, I guard it, and the perception of it, with great care.

Because we interact with our peers and our “communities” without the comfort of solidarity, yet, in an anonymous world behind keyboards, there are those that feel these situations offer them a green light to behave poorly and recklessly.

We’re all familiar with online “trolls,” aren’t we?  The ones who go around the web wreaking havoc on everyone’s lives and enjoying every moment of it?  These people tend to hide behind fictitious names so that no one knows who they are, and their steps can’t be easily traced.  After the demise of those fake identities, they simply create new ones to continue along their senseless paths of destruction.  (Wait just a moment, let’s not focus on these trolls too much, as I have not the time or the energy to lend to these “zeros,” even in my writing.  Moving on…).  And then, there are those who cause similar chaos online under their real names or Pen names…they just don’t care what others think about their poor behavior, and truth be told, these are the ones I worry about most. The fact that they DON’T CARE ABOUT THEIR REPUTATION OR HOW THEY ARE PERCEIVED, is a very scary thing.  Trust me when I say that if they don’t care about their own, they will lose no sleep over trying to destroy or taint yours.

You see, when I hear someone say that they are an Author, I tend to hold them to a certain level of esteem, and I’ll admit, I also expect a certain amount of professionalism and decorum from Authors.  Why?  Because although change is good, there are some things (in my mind) that should never change.

I remember as a child, dreaming and wishing that I could one day meet my favorite Author (Louisa May Alcott), but deep down, knowing that would never be possible.  Not because she died in the 1800’s but, when I was but a young lass, Authors just weren’t so “accessible,” and there was this mystery surrounding them. (And just for the record, a little mystery is a good thing).  We didn’t have the luxury of interacting with them on Facebook and Twitter the way it’s done now, and you know, that wasn’t such a bad thing.  In the way they carried and conducted themselves, the Authors of old cared about their reputations and how they were perceived.  (Kind of reminds you of the Authors on the current RWISA roster as well as those members of RRBC who also greatly value their reputations).

Today, we have many who display attitudes of nonchalance of behavior all over social media.  This is evident when you see the kinds of conversations they carry on on Twitter, the types of images and videos they choose to share on Facebook, and lastly, the behavior they choose to exhibit period.  Sadly, I’m not only referencing the younger generation. I’ve seen the most unprofessional behavior recently from those who are in grandparent and great-grandparent seasons, that have shown me exactly the behavior TO NOT EXHIBIT when I’m in that same season of life.  I’ve witnessed with my own eyes, two adult women (Authors) in knock-down-drag-out cat fights (aka…war of words) on social media, and as an adult, a mom of daughters, and a professional Author…I was embarrassed for them.  Never in a million years, would I behave in such a manner!

In my embarrassment for them, I wondered, Do they not care that others are watching them?  Watching this?  Who would want to run out and purchase their books after witnessing such disgraceful behavior?  I surely wouldn’t.  I imagined seeing the both of them (in the real world) standing outside of a bar, brawling, pulling each other’s hair.  I experienced such embarrassment … for them, because clearly, they weren’t embarrassed at all.

Engaging in this type of back and forth war-of-words publicly, seals the deal on your online reputation.  People who were friendly with you before, start to become quiet in your midst.  You’re now noticing the ones who once called you “friend,” are now moving away from your inner circle.   Still confused as to why?  People who hold themselves in high esteem, are smart enough to know that you can quickly be tagged as “the company you keep,” and I’ve never once heard that reference used in a good way. These people, professionals who care about their reputations, do not want to be aligned with amateurs who are clearly not in their league, nor are they on the same level.  I personally, tend to quickly move away from people who display such volatile and indecent behavior, as you just never know what they’ll do next.   When it’s displayed once, once is enough for me.  {Note to readers:  I’m the lady who believes what people show me … not so much what they tell me}.

As I wrap things up here, my advice to you is this: Think before you speak and think even harder before you act, lest you do or say something which you might regret later.  If in the past you have found yourself guilty of any form of public juvenile behavior, you can still turn things around … if you work hard enough.  Your online reputation is and should be, just as important as your reputation in the real world.  Let what yours say about you, be a true reflection of who you are and how you want to be perceived and received .

What does your online reputation say about you? Is it reputable or is it deplorable?  What do you think others are saying about you, based on this kind of reputation?  We’d love to hear from you via the comments below.

Thanks for stopping by!

Better to remain silent and be thought a fool, than to speak out and remove all doubt.